The Concept of an Operating System Installation Environment

An Operating System Installation Environment (OSIE) is the operating system shipped to the hardware you are provisioning. That operating system starts an application called tink-worker. At that point tink-worker will communicate with the Provisioner (running tink-server) asking for a something to execute (a workflow).

Usually a workflow partitions the disk(s) and it installs an operating system that will be later used as boot device, leaving the hardware with the desired operating system.

When a hardware first starts, there is nothing stored in its hard drive and the bootloader will enter network mode. This mode runs PXE and it broadcasts a DHCP request asking for "something to do". Boots is one of the components shipped as part of the Tinkerbell Stack, it is a DHCP server. It handles the DHCP request and replies with a iPXE script to the hardware containing the operating system installation environment.

Right now we ship our one OSIE but you can build your own or modify the operating system in memory environment if you need kernel modules, drivers or applications that are not shipped from the Tinkerbell community.

When You See OSIE

If you follow the Local Setup with Vagrant tutorial you encounter OSIE at the section "Start the Worker".

At that time the Worker has netbooted and Boots has pushed OSIE to the Worker, the workflow has started, and the Worker does not have an operating system yet. 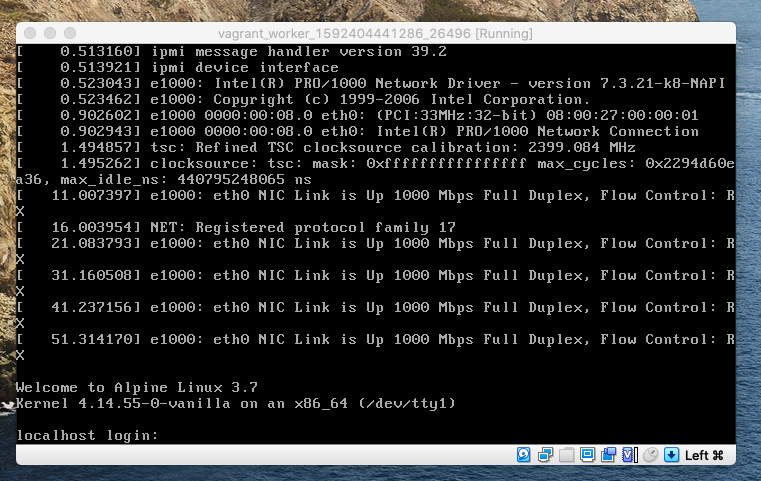 The Welcome to Alpine Linux 3.7 message comes from OSIE.

Tinkerbell's current OSIE is based on Alpine Linux, a well known to be small (~130MB of storage) and easy to customize distribution. The boot process is minimal and it does not require much configuration. OSIE builds on that to provide an environment capable of running the right actions required to configure your Worker and install a persistent operating system.

Currently, the OSIE of today is a bit "too fat"! We are in the process of moving a lot of the customization out of OSIE and into workflows.

The Tinkerbell architecture allows for flexibility in terms of the operating system installation environment you can use. It provides OSIE for simplicity, it is possible to develop alternatives.

One possible alternative is Hook, an installation environment built using LinuxKit. The tinkerbell/hook project aims to provide an "in-place" swappable set of files (kernel/initramfs) that can be used to replace the OSIE environment, which originally came from Equinix Metal. The key aims of this new project are:

More information and on-going development is in the tinkerbell/hook GitHub repository.

As we mentioned you can run your own OSIE. And the reasons can be:

If you are writing your own operating system installation environment, there are a few requirements:

© 2021 The Linux Foundation. All right reserved

The Linux Foundation has registered trademarks and uses trademarks.

For a list trademarks of The Linux Foundation, please see our Trademark Usage page.